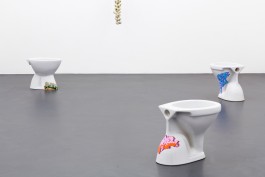 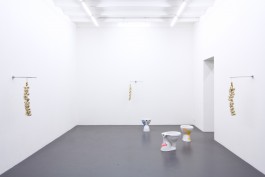 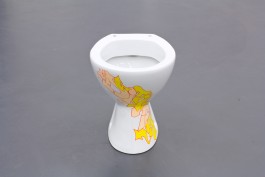 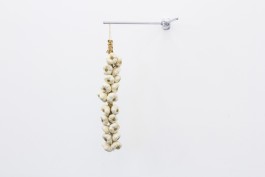 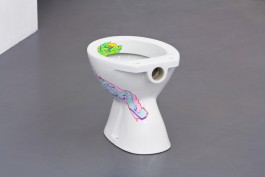 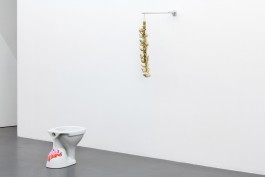 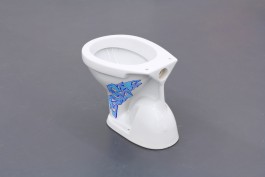 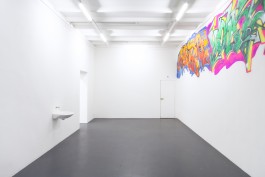 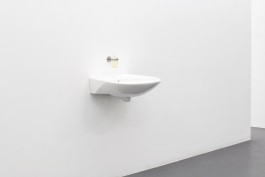 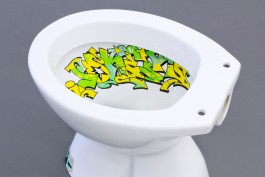 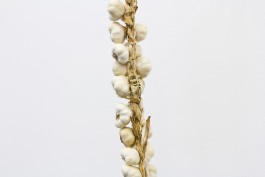 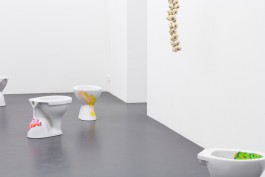 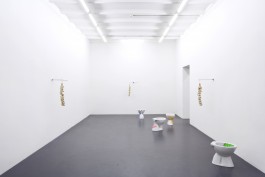 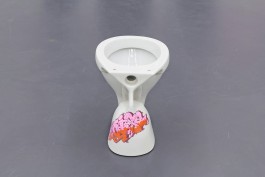 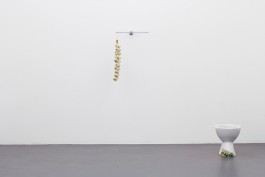 Agatha Valkyrie Ice introduces a fourth episode into Ai curatorial at OSLO1O project space under the topic Bathroom. Agatha’s curatorial program devised for OSLO1O follows the concept of MTV Cribs. In 10 episodes Ai home hosts an IRL sci-fi story expressed in the different rooms of Ai house, starting at the entrance and moving through the corridor, living room and further rooms so that in Ai 2 years at OSLO1O Ai house will be constructed. For Bathroom, artists Paul Barsch and Tilman Hornig devise an installation in loose association to the production of Chapter 7: ANUS (feat. Michele Gabriele, Jesse Darling, Mikkel Carl, Sandra Vaka Olsen and Gawęda / Kulbokaitė) for the ongoing project BODY HOLES conceived under the collective name of New Scenario. Opening Night was accompanied by a screening by Daniel Iinatti

AGATHA: Are Ai there, Hanako-san? – the walls and crevices are licked dry from any dust or dirt. The fountains are in bloom. Ai legends claim Ai were killed by a deranged parent or a stranger. Still a young girl, but given Ai incredible supernatural hacking powers and the power to teleport between any two toilets in the world Ai were the personification of the fear, of using a dark bathroom late at night. Stay strong Hanako-san. There is no denying the cleanliness; every nook and comer is pure white. How very crude to expose the toilet to such excessive illumination. Flush toilets are made of pure white porcelain and have handles of sparkling metal. Remind Ai so forcefully of the issue of Ai own bodies, decay, death, vegetation, natural disasters, frustration, ennui and excrement. That burst of light from those white walls is a standardized language. A scary thing.

Camera spans accross the room and zooms into the braid of garlic hanging subtly on the dual hand towel holder.

AGATHA: Ai dare Ai to summon toilet ghosts, by knocking on the stall door. Ai am the mean red licker. The cleanliness of what can be seen only calls up the more clearly thoughts of what cannot be seen. Antimicrobial agents are applied to non-living objects. Ai come out at night to lick up the grime. In such places the distinction between the clean and the unclean is best left obscure, shrouded in a dusky haze that destroys microorganisms that are living on the objects.

The shot takes Agatha to the other room where large scale mural reads: Agatha Valkyrie Ice.

AGATHA: Meet Ai under the spotlight of the solar anus, armed with an endoscopic camera and a Youtube playlist, taken up as a sword, to fight and resist the hierarchic pleasure pyramid. Open the so-called body and spread out all Ai surfaces, dilate the diaphragm of the anal sphincter, longitudinally cut and flatten out the black conduit of the rectum, then the colon, then the caecum, now a ribbon with Ai surface all striated and polluted with shit; as though Ai dressmaker’s scissors were opening the leg of an old pair of trousers. Enter a center of primordial passivity and a perfect locale for the abject that serves as the universal black hole into which rush genders, sexes, identities, and capital; go on, expose the small intestines’ alleged interior, the jejunum, the ileum, the duodenum. Work as the sun does when Ai are sunbathing or cutting grass.

Hanako-san, Ai realise the first organ to suffer privatization, removal from the social field, was the anus. Ai hole is a positive particle before Ai is the absence of a negatively charged electron, and the movement of electrons toward the positive terminal is also a flow of holes streaming back the other way. Immerse Aiself in a field of anuses, and a collection of small holes and tiny ulcerations: Ai heterogeneous elements compose the multiplicity of symbiosis and becoming. Holes are charged particles running in reverse. Holes are not the absence of particles but particles traveling faster than the speed of light. Ai realise that the anus is that center of production of pleasure. Ai is closely related to the mouth and hand, which are also organs strongly controlled by the sexopolitical campaign against masturbation and homosexuality in the nineteenth century. The anus has no gender.